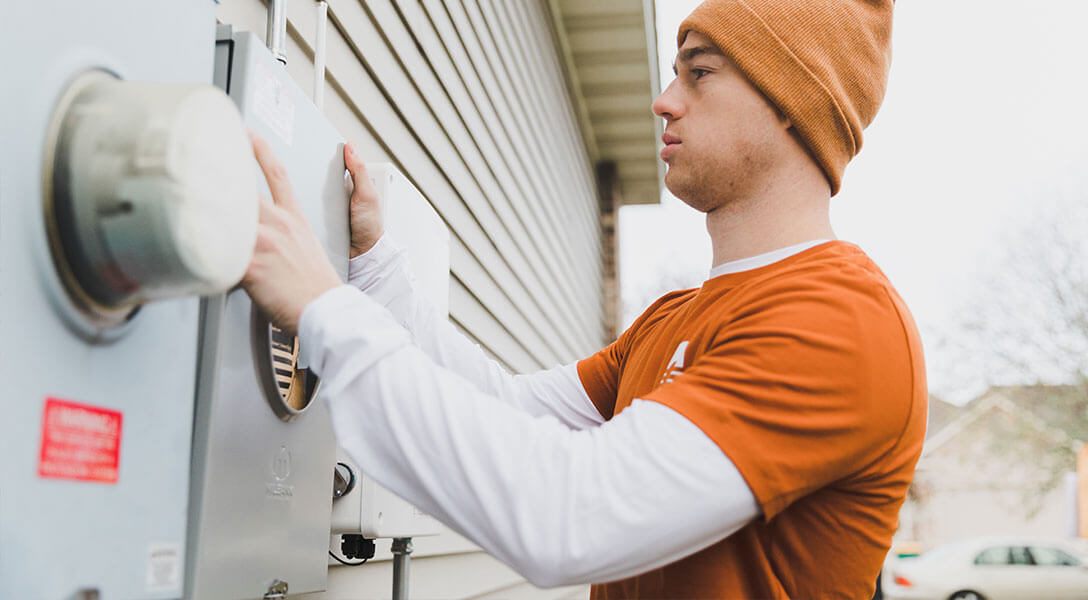 Did you know that solar panel technology is about 70 years old? The 1950s may be notorious for the invention of Mr. Potato Head. But it’s the solar panel leading the race for the greatest invention of that decade.

They may seem like a modern marvel. In reality, solar panels have been in development since 1954, gaining in popularity each year. Many have voiced their disappointment that solar panels don’t come with cute top hats, but most feel the pros outweigh the cons. Homeowners across America are enjoying the many benefits solar panels provide to their home and planet.

When Daryl Chapin, Gerald Pearson, and Calvin Fuller developed the first panels in Bell Labs in 1954 it didn’t seem to be a contender for toppling even the most elementary modest combustion systems, but as the industry’s leading professionals have put their heads together, we’re seeing that very movement happening in real time.

But…how the heck does it work? Illumination lies within. Keep reading for a breakdown of the science and application behind solar panels.

There are two types of solar power systems. This is because along with photons, the sun radiates copious amounts of heat, too.

These two forms of solar power systems are thermal and photovoltaic.

Thermal solar systems are almost always used in industrial and utility power generation systems instead of home use.

Medium-temperature thermal collectors for direct heating of water are common in sunny areas for both residential and commercial use. Oftentimes, these systems can also reduce CO2 emissions by up to three tons per year, per family.

This is an exciting technology for areas of the world where electricity transmission limits residential and industrial processes needed. It’s quite a niche, and not efficient at producing electricity.

How Do Photovoltaic Cells Work?

Photovoltaic cells work by absorbing photons and knocking electrons off of atoms. They move from materials with excess electrons to an atom that doesn’t have enough. That motion, or current, causes electricity. It’s the sun working with science–we love it!

It takes a circuit current to produce electricity, so when the electrons flow back into their starting point they replace other electrons knocked loose from other photons.

Photovoltaic power, on the other hand, is quite efficient at producing electricity from the high-energy photons bombarding our planet. Designing the system to reduce heat makes this process even more efficient.

The three common types of photovoltaic (PV) solar panels are:

Besides these three there is also a third-generation effort in the works to make transparent cells. This would, in effect, make it possible for phones and standard window panes to generate electricity. These technologies wouldn’t be very efficient, but they would be “transparent” enough to improve efforts of sustainable energy generation.

Perovskite cells are already catching up to the efficiencies of Mono- and Polycrystalline silicon cells, and second-generation TFSCs.

Regardless of the available solar cells today, the ones with the greatest bang for their buck are monocrystalline silicon cells…the ones used on, you guessed it, solar panels! They make a cell from a single slice of a metallic monocrystalline structure.

Thin-film solar cells are flexible and different from their counterparts in many ways. TFSC is somewhat transparent on its own since the silicon or other materials can be only a single micron in thickness.

How Do Solar Panels Work for Your Home?

Keyword alert! Efficiency and kWh (or KiloWatt hours) are one of the main things you’ll be assessing when you consider a home solar system.

Efficiency or Total Panel Efficiency (TPE) is measured using standard test conditions (STC) of one kW per meter squared at a cell temperature of 25°C, and an air mass of 1.5. Pmax is the maximum power the panel will absorb, no matter how much energy hits the panel.

Many panels are advertised with one criterion being their efficiency of 16%, 20%, or even 23% for N-type IBC models.

That said, higher efficiency doesn’t always mean much higher payback. With a matter of 2.5%, you could lose out on 60W of power, though. Across a typical installation of around 12 panels, that means you’re missing out on 720W.

Efficiency in a lab is one thing, and efficiency in the real world is another. There are many factors that play a role in getting the most out of your panels, all of which an experienced technician will take into consideration when planning an install.

As mentioned before, heat could be your biggest enemy. More heat means more electrical resistance. To find out how this affects your panel, a simple “Power temperature coefficient” can help, measured as %/°C.

You could be losing as much as 30W on your panel, for even a 9°C rise in operational temperature over 25°C STC conditions.

The first thing to consider with a home solar system is whether or not you want to be on or off the grid. This decision has a major impact on the design of your system!

On the grid, you’ll be giving power to the commercial power utility company during the day and using power from the grid during darker hours or seasons. Irradiance will change whether your panels are mounted against your roof on a pitch or following the sun.

Next to consider is the PV inverter.

If you are on-grid, you can choose between a microinverter system, power optimizer, or string inverter system. String inverters hook all of your panels together, losing even more electrical efficiency, before inverting it all at once from DC to AC.

Power optimizers effectively separate your panels from each other and regulate the power going to the inverter. This clean energy is more efficient. Microinverter systems invert each panel at the source, sending it to your breaker panel and back to the grid.

If you have a battery backup, it gets fed direct DC power, which then gets inverted to AC as it enters your breaker box. This extra step is an extra expense, but it saves over buying fuel for backup generators on diesel, LPG, or gasoline.

How Do Solar Panels Work?

Now that you’ve got the science behind the system, you can make an informed decision. Knowledge is power, and in this case, it’s solar power! It’s never too late to begin harnessing the power of the sun in your own home. The experts at Primitive Power can’t get enough of these details, equations, and solutions! Start with a free quote (this includes a rendering of your roof with solar panels installed!) and see how much you can save with solar panels.

Are you ready to own your power? Reach out to Primitive Power today!